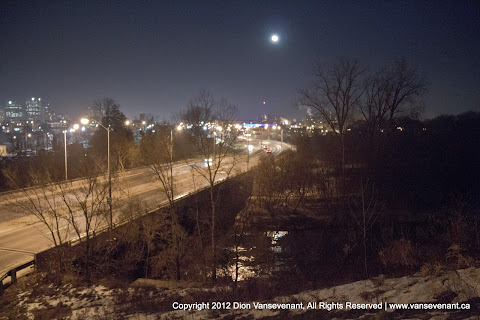 We had a glorious full moon here this past week. My previous attempts at photographing a full moon resulted in what appeared to be a picture of a flashlight in a dark room. Partly because the focal length was too short, and partly because I wasn’t exposing the image properly.

Well, I was able to sort of solve the focal length issues by using my 18-200mm lens, but I still need some work on exposure.

My first few shots were in the green space in Wortley Village, but the moon was not yet high enough to clear the trees, and my hands were not steady enough for a full zoom shot. So, I ventured down Wortley Road to the bridge that crosses over Horton St.

I parked on the nearest side street (taking note of the unmarked TV truck “stopped” under the “No Parking sign”), and wandered back to the bridge. As I crossed Wortley, the TV cameraman was coming back to his truck. I nodded to him, fellow camera-type-person braving the chill, “She’s beautiful, isn’t she?” indicating the moon. “Yes, it is,” came the reply. Poor guy, probably had an editor or director, or whatever the heck TV people have, say they needed a shot of the full moon for the 11:00 show, and he drew the short straw.

Bracing myself as best I could on the bridge railing, I took aim at the skyline. Dammit. A little too late for a good shot of the moon hanging over the city. She was too high up from this vantage point. Well, we make do with what we’ve got, and learn for next time.